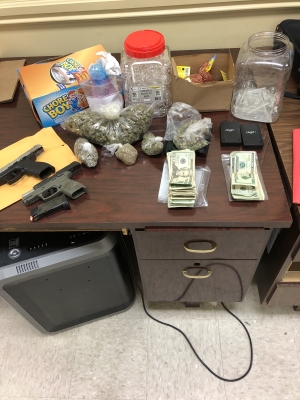 The Mobile Police Department Narcotics and Vice Unit conducted a three-month undercover operation, called Operation Grab and Go, in response to numerous complaints of drug sales, loitering and violence in the Azalea Road area. The target location was the Discount Zone located at 507 Azalea Road. Five individuals were identified as drug dealers at the location.

On Thursday, January 13, 2022, the Narcotics and Vice Unit, along with the Street Enforcement Team and the K-9 Unit, executed a search warrant at the location. During the search warrant, a temporary restraining order (TRO) was executed to close the store due to the history and continuous nefarious acts at the location. The Asset Forfeiture Detail served all owners the proper paperwork for the TRO.

Operation Grab and Go resulted in seven arrests. Of that number, two of the individuals arrested were targets. Officers also recovered two guns.

Here is a list of those arrested and their charges.

Homicide Arrest on the 2400 block of Senator Street

Homicide Investigation on the 700 block of Johnston Avenue