The MPD Narcotics/Vice Unit seized $100,000 worth of cocaine and 13 firearms in a drug raid this morning. After a yearlong investigation, officers executed a search warrant at 6240 Rester Road, which led to the arrest of 44-year-old Marcus Dryer.

Dryer who has a criminal history of narcotics dating back to 1998 was found in possession of 1 kilo and 33 ounces of powder cocaine. That is a street value of $100,000. Officers also seized from Dryer’s residence 12 ounces of marijuana ($1,500 street value).

Thirteen firearms were seized, which include five long guns and eight handguns. One of the firearms was stolen from Prichard jurisdiction.  Additionally, three vehicles were confiscated: 2011 Dodge Ram, 2021 Dodge Ram and 2018 Lexus. 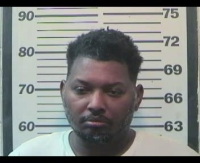