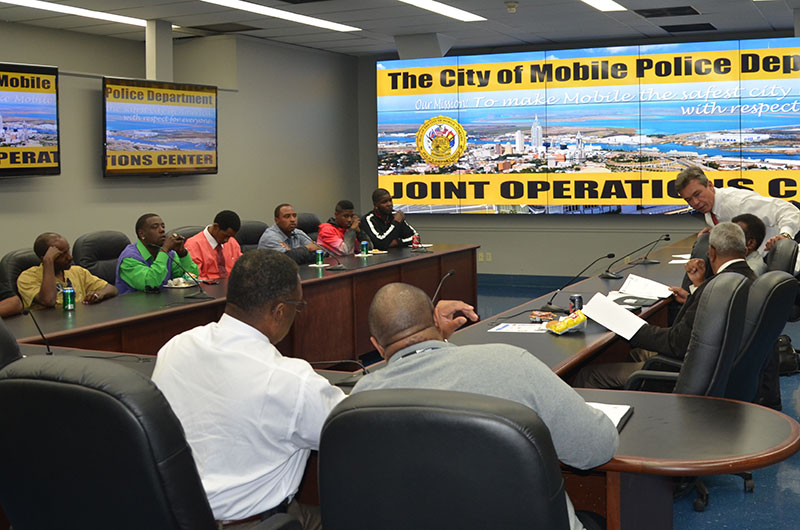 
The Mobile Police Department Citywide Citizen Advisory Panel is the result of many meetings that occurred shortly after James Barber took office as the Chief of Police in November 2013. The meetings held were with concerned community leaders complaining about the tactics and strategies used by law enforcement that they felt were unfair and the harassment young people encountered in the community.

The tactics the community leaders complained about were associated with Operation Integrated Municipal Police Anti-Crime Team (IMPACT) that was launched mainly in minority neighborhoods. From July 26, 2012 to September 26, 2013, 4,174 people were arrested mainly in minority neighborhoods, using saturation patrols and stop and frisk tactics. Despite these numbers, crime went up. Although Operation IMPACT was immediately suspended in 2013 when James Barber was appointed by Mayor Sandy Stimpson as the Chief of Police, the resentment over the tactics can still be felt today.

Immediately after Police Chief James Barber took office, engagement with community leaders began with the goal to determine acceptable tactics that would be effective in improving the safety of Mobile’s highest crime neighborhoods that suffered from open air drug markets. The partnership with community leaders led to the development of multiple programs, two of which are now recognized on a national level. Those national programs are Second Chance or Else (SCORE) and Bridging the Gap. Both have built trust and respect between the police and the citizens of Mobile.

In 2015, the discussions moved to formalize the partnerships with community leaders into a citywide panel while maintaining the sub panels to help with specific problems in specific neighborhoods. A policy for the Citywide Citizen Advisory Panel was approved on June 22, 2015, establishing the Department as one that is responsive to the needs and concerns of the community it serves as they pertain to police services.

The objectives of the Citywide Citizen Advisory Panel Policy are to advise the Chief of Police on matters of public concern, to review incidents related to police-community relations at the discretion of the Chief of Police, and to act as a sounding board on issues related to current and proposed community-oriented policing programs by providing feedback and direction.

The original panel was so effective that a second Citywide Citizen Advisory Panel was assembled from the Mayesville area to help with similar issues. Each panel consists of approximately 12 pastors, activists, and community leaders. The U.S. Attorney for the Southern District of Alabama and FBI Special Agent in Charge are partners in the formation of the panel and involved in the national programs.