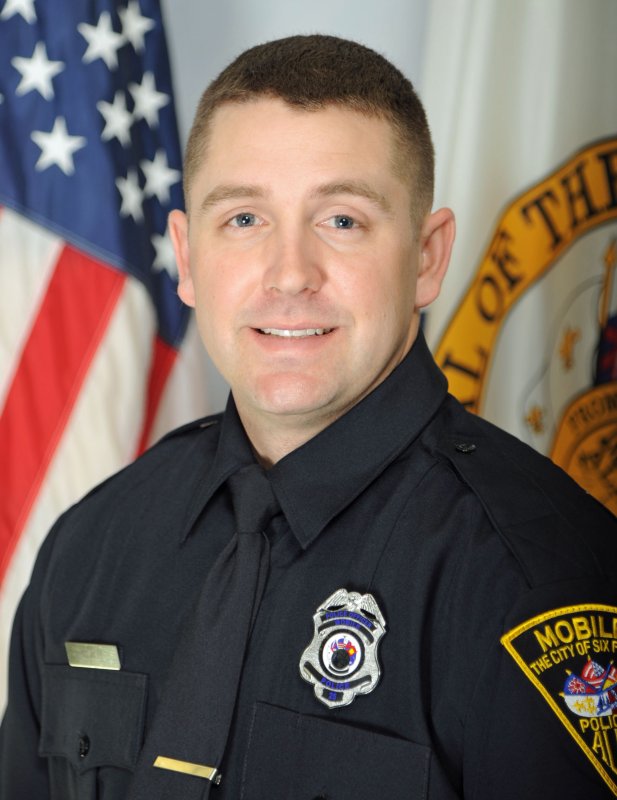 Officer Stephen Corley has been named the Mobile Police Department Officer of the Month for April 2019. Corley, who works patrol in the First Precinct, has demonstrated excellence in his overall performance. He responded to 113 calls for service and 60 backings, made 19 felony and 13 misdemeanor arrests, and wrote 11 traffic citations.

Corley’s assigned patrol area is around Dauphin Island Parkway from Duval Street to Interstate 10. While on patrol, he routinely checks on suspicious suspects and vehicles for illegal contraband and warrants. There were several incidents in particular during the month of April in which Corley displayed his dedication to duty.

On April 4, 2019, Corley successfully apprehended a suspect who had just burglarized a convenience store. Officers were dispatched to a commercial burglary alarm at the On the Run Convenient Store off Halls Mill Road. While en route to the location, Corley observed a man riding a bicycle on Halls Mill Road near Pleasant Valley Road in the opposite direction of the store. He was carrying a large blue duffle bag on his back, which appeared suspicious.

As Corley approached, the suspect abandoned the bike and attempted to flee on foot. He had a large amount of single packs of cigarettes and lighters, a large pry bar, vice grips and a small sledge hammer inside the bag. Officers on the scene of the commercial burglary alarm confirmed that the business had been forcibly entered through the rear door. The suspect was caught on video surveillance entering the business through the door and then leaving with several items. It was also determined that the suspect was responsible for two prior burglaries at the same location. He was arrested and charged on all three burglaries.

On April 6, 2019, Corley recovered a stolen motor vehicle. While patrolling a residential neighborhood, he observed a vehicle matching the description of a recently stolen vehicle pass him at a high rate of speed. Corley made a U-turn and attempted to catch up to the vehicle. As he got closer, the vehicle accelerated at a high rate of speed and attempted to get away. After a short pursuit, the vehicle stopped on a dead end street. Four male suspects exited the vehicle and fled the scene on foot into a wooded area. Realizing that he did not yet have a backing officer on the scene with him, Corley stayed with the vehicle rather than foot chase the suspects. After conducting a check of the vehicle, it was confirmed active stolen. The recovered stolen vehicle was then processed for evidence and impounded.

On April 12, 2019, Corley conducted a traffic stop on a white Kia Rio traveling on Duval Street with no tag lights. The passenger of the vehicle told Corley that he did not have any identification on him at the time. However, he did provide his name and date of birth. Corley determined the information given by the passenger to be false. As he questioned the passenger further about his identity, the passenger told the driver to drive away. Corley then removed the passenger from the vehicle and placed him in restraints. While conducting a frisk, Corley discovered several controlled substance prescription pills in his pocket which were believed to be Xanax.

On April 20, 2019, Corley apprehended a suspect who had an active felony warrant out of the Mobile County Sheriff’s Office for sexual abuse first degree. Corley noticed a man and woman standing in the street arguing with one another. He detained them both in order to figure out what took place. It was determined that the man had an active warrant for sexual abuse first degree. Upon verification of the warrant, the man was arrested and transported to Metro Jail.

On April 25, 2019, Corley located a 2004 Lincoln Navigator bearing an Alabama license plate near the intersection of Dauphin Island Parkway and Duval Street. This was the same vehicle that was issued a BOLO the previous day. Upon initiating blue lights, the driver of the vehicle attempted to elude and led officers on a vehicle pursuit that ended near Johnston Avenue and Gosson Street. The driver and passenger were both detained and transported to the First Precinct to be questioned. Following the interview, both suspects were transported to Metro Jail and charged with attempted burglary third degree and theft of property fourth degree.

For his accomplishments, the Mobile Police Department will honor Corley, who has been on the force since September 2016, at the Officer of the Month Luncheon. The luncheon is sponsored by the Midtown Optimist Club. It will take place Wednesday, May 8, 2019 at noon at the Azalea City Golf Course Club, 1000 Gaillard Drive.