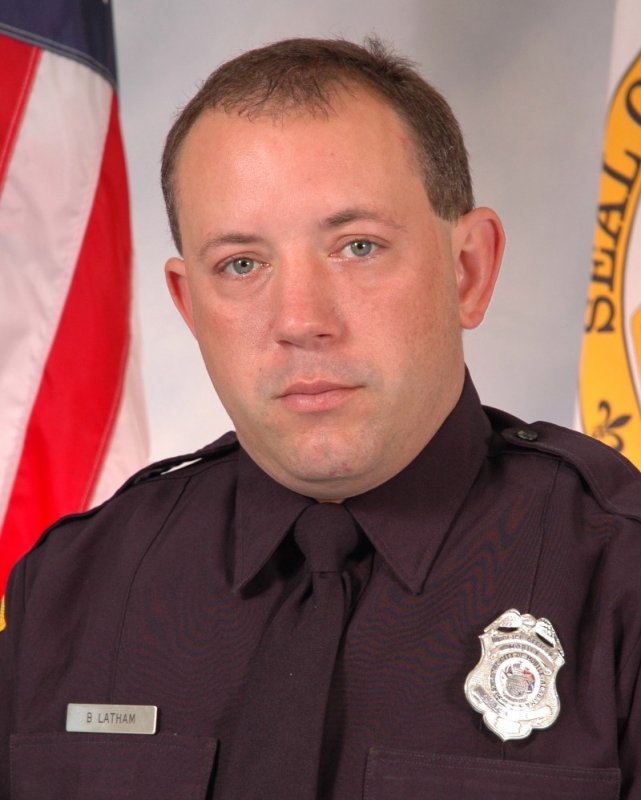 The Mobile Police Department has named Bradley Latham the Officer of the Month for June 2019. Serving as a police officer for 15 years, Latham works patrol in the Second Precinct. During the month of June, he responded to 97 calls for service, backed on 57 calls, issued 12 traffic citations, and made 17 felony and 12 misdemeanor arrests.

Latham takes upon himself to gather information on wanted suspects in the Second Precinct area and attempts to serve felony and misdemeanor warrants on these individuals. His effort has directly resulted in the reduction of crimes.

On May 31, 2019 at approximately 11:41 p.m., Latham and another officer responded to a residential burglary on Quimby Drive. The homeowner said she was lying on the couch waiting for her teenage son to come home. She heard the back sliding glass door open. Expecting to see her son, instead she saw an unknown man. She alerted him of her presence and the man ran.

Officers spoke with the victim’s husband. He said several items were removed from the residence and placed outside, next to the door. The burglar had also ransacked their vehicle.

Latham stayed in the area for a while after the initial call due to other complaints of possible burglary. He observed a man bail out of a white Ford Explorer nearby occupied by two other people. He initiated a foot pursuit but the man was able to elude capture. When Latham returned, the Ford Explorer was abandoned at the dead end of Nannette Drive. He discovered that the vehicle had been stolen.

A few days later, Latham responded to the 8000 block of Huber Drive to search for the suspect, as this was an area he found that the suspect frequents. After speaking with neighbors, Latham got information that the suspect had just taken his grandmother for her radiation treatments at USA Mitchell Cancer Institute. The suspect was located in the waiting room and taken into custody.

After questioning and the suspect admitting to his crimes, Latham transported him to the Mobile County Metro Jail. He was booked on the felony charges of burglary second degree, burglary third degree and unlawful breaking and entering a vehicle.

On June 15, 2019 at approximately 2:57 p.m., Latham was dispatched to a domestic dispute involving child custody. Upon arrival, Latham recognized the man involved as being wanted in reference to several thefts that had occurred at Walmart. During the months of March, April and May, Walmart experienced a rash of thefts from the same suspect, as identified by surveillance video.

After settling the child custody issue, Latham arrested the man and booked him into Mobile County Metro Jail on charges of criminal trespass third degree and theft of property fourth degree, with several additional charges pending.

On June 16, 2019, while patrolling the hotels on Inn Road in an attempt to locate a wanted felon, Latham observed a man exit a minivan. But, he was dispatched to a traffic accident with injury and had to leave the area. He heard dispatch bolo the minivan as recently being stolen from the Fourth Precinct. Latham advised Fourth Precinct officers that he had just seen the minivan at the Roadway Inn, on Inn Road, and indicated who was occupying the vehicle. Fourth Precinct units responded to Roadway Inn and were able to take the suspect into custody. While Latham certainly could have withheld the information, so as to make the arrest himself, he instead chose to work in cooperation with other units to ensure the suspect was apprehended.

On June 30, 2019, Latham was dispatched to a call involving trespassers living in a vacant residence posted for sale. The suspects had barricaded themselves inside. Latham quickly established a perimeter around the residence with his backing unit and called for assistance.

When additional help arrived, Latham forced entered the residence directing a room to room search. He observed two suspects hiding in the attic. He was able to talk one suspect into surrendering. The second suspect attempted to break out of the attic through the roof vent but he was soon apprehended. Several stolen items were discovered inside the residence.

The apprehension of the suspects and clearance of these cases is a direct result of Latham’s professionalism, calm demeanor and dedication to his profession.

The Mobile Police Department will honor Latham at the Officer of the Month Luncheon on Wednesday, July 10, 2019 at noon. The luncheon is sponsored by the Midtown Optimist Club and is held at the Azalea City Golf Course Club, 1000 Gaillard Drive.